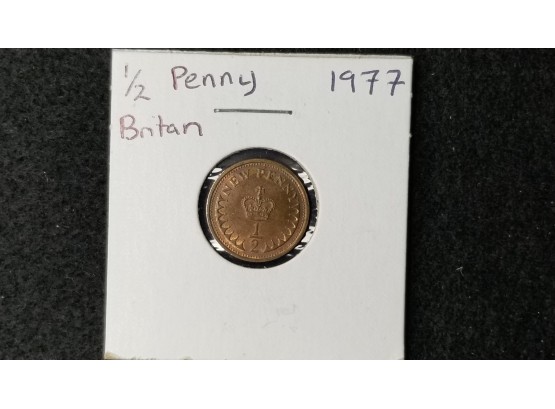 The half penny coin's obverse featured the profile of Queen Elizabeth II; the reverse featured an image of St Edward's Crown. It was minted in bronze (like the 1p and 2p coins). It was the smallest decimal coin in both size and value. The size was in proportion to the 1p and 2p coins.
Obverse:
Around, the monarch's legend and the date: ELIZABETH · II · D · G · REG · F · D · 1977. Translated from Latin: Elizabeth the Second, by the grace of God, Queen, Defender of the Faith 1977.
Reverse:
Within a beaded circle, at centre: a crown (representation of St Edward's Crown); around above, the denomination NEW PENNY; below, the value in a numeral 1/2; around below, triangular motifs.