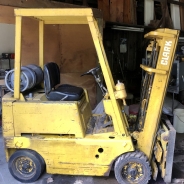 At 9 pm in the evening, before of the pickup day, I received a strange message from Kevin Cini:
"Unfortunately there was an issue at the property of one of the consignors in the East Kingston auction (not at the East Kingston location, a different property and consignor). Several items were taken from his property including 3 lots that were part of our auction and 1 of those lots was your lot. It's not often that we can have complete control of a property we're working with and althoughrare, occasionally issues like this happen. ..."

Although I received a refund of the full charged amount for this lot and apologies, I don't think that's how an auction works.

When i arrived to this chaotic barn sale I was not greeted, told where to park or even looked at, tho there were clearly people who were working there in the immediate area. Once i found the woman checking people in she was rude and accused me of not paying and had no interest in trying to look it up too see that i had paid the night before. The bone saw that was supposed to be in the sportsman lot #2 was not there, after looking around for a while they decided that someone had stolen it. They had no resolution for the issue so i quickly looked around and found some old gas cans that i suggested i could take in lue of the bone saw. Turns out the bone saw is $100 new (the one in the pics was like new) and the gas cans are worth squat.
Upon inspecting the hand tools i purchased along side the images from the auction i notice that i was missing a full set of impact sockets that are clearly in the image(bottom right) and a new air fitting. I messaged the seller and once again they have no resolution for me. I wont be buying from these people again.

Stone Ridge Trading
Hi Chris, thanks for posting this review and I'm happy to respond......Auction pickups are done in set a window of time, auctioneers usually don't have control of how many people show up at any given time. You showed up at a busy time. Additionally this auction had many large pieces in it which required buyers - and their helpers, to disassemble and load which means lots of people running around. Auctions by their nature often have periods of high activity (you call chaos)......The woman you refer to is my wife and I can fill stadiums with people who will attest she's never been rude in her life. If you had claimed I was rude to you no one would doubt you, but when you claim it was my wife that was rude you loose any credibility. So no one was rude to you......You in fact had not paid your invoice as of 8pm the night before pick up because your credit card had been declined multiple times since the close of the auction. I emailed you twice, the website emailed you automatically, and we got no response from you. There wasn't a lack of interest in looking it up for you we were in a barn with no wifi and poor cell service. And as soon as you provided a paid receipt - which we couldn't verify but took you at your word - we got you your items......The bone saw was definitely missing. I would've gladly refunded you the price you paid for the entire lot ($8) and let you keep the rest of the lot for free. You asked for the metal cans instead.....$100 bone saw??? Regardless that they're on Amazon for $11 to $59 with free shipping....you're complaining about the difference in the price of a new item vs used items. And still, its all irrelevant because it was your decision, we gave you what you asked for.....You picked up your lots, you inspected your lots, you signed the receipt saying you got what you were supposed to get. You later claim items are missing and the items you claim are missing were not found at the site and I told you that. What "resolution" is there......Finally I am glad to hear that you won't be doing business with us again. There's either a real cognitive problem here or you're trying to run some sort of scam. Either way, to ensure there are no mistakes in the future I will flag your account in the system to prevent any accidental bidding.
View by:
Filter by:
Contact Us