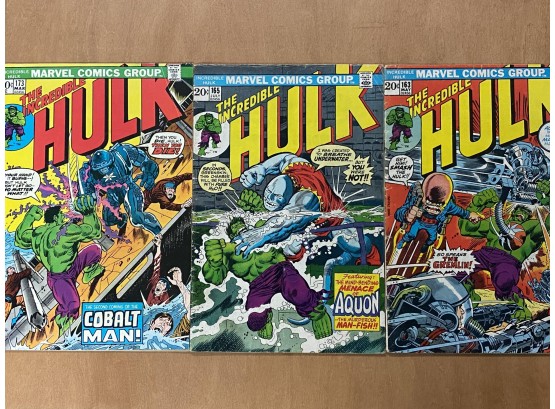 Cover art by Herb Trimpe. Trackdown, script by Steve Englehart, pencils by Herb Trimpe, inks by Sal Trapani; Ross is chasing the Hulk through the ice-bound wastes of Canada when they are both captured by the Gremlin; The Gremlin experiments on Hulk, trying to gauge his power levels so he can implement them into his Super-Trooper suits; Trying to control the Hulk through gas, he accidentally causes the Hulk to revert to Bruce Banner; Ross and Banner hatch a plan for Bruce to turn back into the Hulk and escape; Unfortunately, once the Hulk persona returns, he only remembers that he hates Ross and leaves him in the hands of the Russians; Betty learns that the Hulk is alive and her dad has been captured. 32 pgs. $0.20. Cover price $0.20.

Cover art by Herb Trimpe. The Green-Skinned God!, script by Steve Englehart, pencils by Herb Trimpe, inks by Sal Trapani; Hulk has been trapped on the ocean floor by Omen but is helped by Omen's traitorous son who wants the Hulk to lead his people back to the surface world; When Omen catches wind of the betrayal, he unleashes Aquon to battle the Hulk and quell the rebellion; The fight damages Omen's submarine badly enough that he has no choice but to rise to the surface and capitulate to Filius' demands; As the Infra-Worlders joyously experience the surface for the first time, they begin to explode in the new lighter pressure; Talbot and company finish their training and head off to rescue Ross from the Russians. 36 pgs. $0.20. Cover price $0.20.

Cover art by Herb Trimpe. Anybody Out There Remember...the Cobalt Man?, script by Roy Thomas, art by Herb Trimpe; Ralph Roberts stands in close proximity to a nuclear blast so he can once again have the power to become Cobalt Man; The Hulk battles Cobalt Man on board a ship but their fracas sinks the boat, just as Hulk begins to turn into puny Banner. 32 pgs. $0.20. Cover price $0.20.