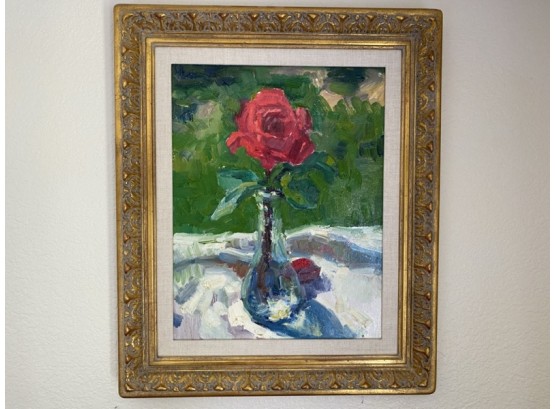 Measures: 20"W x 24"H
About the artist: Scott Switzer makes use of gestural brush strokes and a complex melding of colors to portray the language of abstract figuration in the creation of oil paintings depicting layered images of people, animals, and objects that immerse us into the emotion, dreamtime, memory, and allusion of the artist’s reality. Born in 1960 in Billings, Montana; as a child Switzer’s interest in art was encouraged by his parents. The loss of both his brother and his father by the time he was eighteen shaped the artist’s tumultuous adolescence, which was resolved through recovery, faith, and a new-found devotion to painting. He attended the Otis Parsons School of Design in Los Angeles, and later studied with the painter Clyde Aspevig, an important mentor. Switzer returned to Billings, married the daughter of his high school art teacher, and established a studio there. He focused on plein-air painting, influenced by post-impressionism, and inspired by turn of the century and contemporary Russian landscape painting and Soviet Realism. His paintings of the American West drew the attention of collectors and galleries throughout the U.S. Switzer has been deeply affected by his travels and the people that he has encountered across America, Mexico, Russia, China, and beyond. For five years starting in 1999, he and his family lived in Alaska, where he painted in response to the natural environment. Two years earlier, he and his wife had adopted the daughter of a Native American friend, and subsequently adopted the girl’s brother. These additions to their family familiarized the Switzers with Native American culture, and influenced their philosophy of life and ethic. While living in Costa Rica, a visit with the native Wimea people in 2009 became a turning point for Switzer, with his resolving to follow his own expressive path as a painter. His work began to reflect his interest in modern, post-modern, and neo-expressionist painting. Switzer’s paintings have been exhibited widely in solo and group exhibitions regionally and nationally since 1989 and his work is included in numerous private and corporate collections. His “Torah Series”, an imaginative evocation of the first five books of the Hebrew Bible, in an epic series of fifty-four paintings, and 16 additional large scale canvases, “Related”, were selected in 2014 for inclusion in a national museum placement program and have been the subject of several one person exhibitions. The artist is currently working on canvases that portray his daily musings and the agrarian lifestyle in north central Idaho, where he lives with his wife and youngest son on the Nez Perce Reservation.

WHERE TO PICK UP:
Private Residence
Cheyenne, Wyoming 82009
(Winning Bidders Will Be Given Full Address VIA EMAIL)