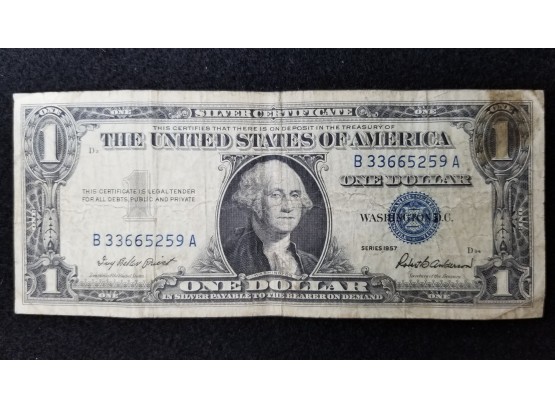 The obligation on the Series 1957 $1 Silver Certificate states, “This certifies that there is on deposit in the Treasury of the United States of America [one dollar] in silver payable to the bearer on demand… This certificate is legal tender for all debts public and private.”
When these notes were originally issued, someone with these notes could have walked into a typical bank and would expect to receive silver coins amounting to the face value of the Silver Certificates surrendered in that transaction. So, in the late 1950s or early 1960s, that may have meant trading in a Series 1957 $1 Silver Certificate for a Morgan Dollar or Peace Dollar, large silver coins that were still readily available for face value during that time.

However, around 1963 the price of silver increased to the point that 90% silver Dimes, Quarters, Half Dollars, and Dollars were suddenly worth more for their intrinsic bullion value than for their face value. This led many people to begin hoarding silver coins, removing them from circulation in massive numbers and resulting in a nationwide coin shortage.
The United States government acted quickly in response to the rapidly changing situation. On June 4, 1963, Congress abolished the production of Silver Certificates. Five years later, on June 24, 1968, an Act of Congress stopped any further redemption of Silver Certificates for silver bullion. Silver Certificates were eventually replaced with Federal Reserve Notes, which remain in use today. However, Silver Certificates still retain legal tender status for obtaining Federal Reserve Notes of the equivalent value.