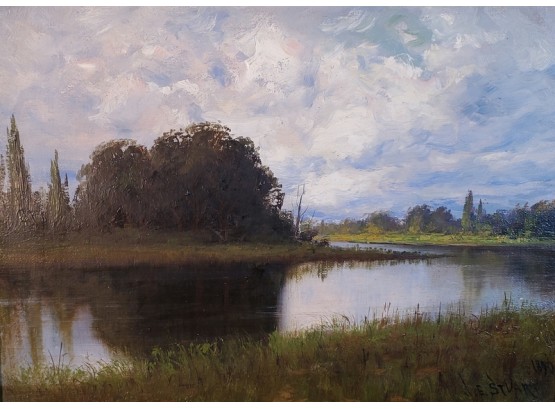 
Shipping is available for this item. Please contact us for a quote.

Biography from the Archives of askART

Photo of James Everett Stuart
Born in Bangor, Maine, James Everett Stuart became known for his panoramic landscapes from Maine to California to Alaska to the Panama Canal, but especially of the American West with focus on Northern California and Oregon. Reportedly he painted more than 5000 paintings during his lifetime and originated a method of painting on aluminum and wood with a special adhering process that he thought made his work quite durable but proved not to be so. He also wrote on the back of most of his paintings

His parents took him to California at the age of eight, and the family settled in San Francisco where he attended the public schools and studied art with Virgil Williams, Raymond Yelland, Thomas Hill, and William Keith at the San Francisco School of Design. His early work was dramatic California landscape including the Sacramento and San Joaquin rivers, and in style the works were moody and mysterious and suggestive of the French Barbizon School. He first traveled to the Northwest in 1876, and in 1881, he opened his studio in Portland, Oregon and from there traveled throughout the West and East Coast and into Mexico. Subjects included Yosemite as well as California missions and adobes. He painted landscapes whose sales ultimately were financially remunerative and which established his reputation.

in 1885, he first went to Yellowstone where he camped for several weeks, supplied himself with fish for food, climbed steep cliffs including Electric Peak, and filled his sketchbook for studio paintings. The following summer, Stuart returned, having negotiated a free pass from the Northern Pacific Railroad in exchange for paintings. At the end of the summer, he went East to New York City on the return part of his train pass. Settling a studio in New York for four years, he continued to arrange several more summer railroad passes to Yellowstone. He was unable to arrange a formal arrangement for painting sales from the Park's gift shop, so he sold paintings from his tent.

Of those years, he expressed that he much preferred being in the park to studio painting, but he stopped visiting in 1889 and instead traveled to Alaska and the Coastal Range.

During much of the 1890s, he lived in Chicago, but in 1912 returned to San Francisco until his death in 1941. There, from his studio near Union Square, he was highly successful and popular among his peers, underscored by his membership in the Bohemian Club. Many of the owners of old homes in California have his paintings on the wall, suggestive of a time of grandeur. One of his paintings is in the White House, and his work is in the historical societies of Oregon, Washington, and Montana.

Notes: Painting is in good condition, the frame is starting to show some wear.

Federal Way, Washington 98023
(Winning Bidders Will Be Given Full Address VIA EMAIL)

Saturday, 6/26, 10:00 am to 2:00 pm
Winning Bidders Will Receive Address Via Email - LET US KNOW IF YOU DON'T RECEIVE THIS (Make sure you have selected to receive winning bid emails in your dashboard via either email or text)-
Auction win emails and invoices can also be accessed via your dashboard after the sale closes.

PICKUP: FEDERAL WAY, WA ON SATURDAY JUNE 26TH FROM 10AM TO 2PM - NO EXCEPTIONS. ITEMS NOT PICKED UP DURING THESE HOURS WILL BE SUBJECT TO A $10 A DAY STORAGE FEE (SEE TERMS & CONDITIONS)

MASKS MUST BE WORN BY ALL BIDDERS PICKING UP ITEMS.
Please maintain social distancing with 6' between you and others.

All items are SOLD AS IS. Bidders are strongly encouraged to ask questions prior to bidding. While Foss Appraisal Service will do its best to list any damage, repairs or restorations, the absence of these descriptions or conditions must not be taken to imply that the lot is in perfect condition. Most of the items Foss Appraisal Service sells are antique, vintage or used. You should expect signs of wear consistent with age. All sales are final. No returns, credits or exchanges.