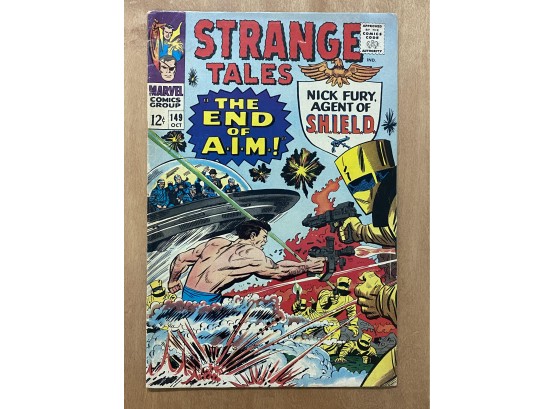 Cover pencils by Jack Kirby, inks by Mike Esposito. Nick Fury stars in "The End of A.I.M.!", script by Denny O'Neil and Jack Kirby (co-plot), pencils by Jack Kirby (layouts) and Ogden Whitney, inks by Ogden Whitney; A.I.M. agents steal an LMD which turns out to be the real Nick Fury; The Heli-Carrier is on high-alert after Fury's leap and Sitwell plants a tracer on Count Royale as he rushes out; A pair of fleeing A.I.M. agents are met by one of the Secret Empire, which is a branch of "THEM"!; The A.I.M. men are gassed unconscious by Gabe Jones working undercover; Jasper trails Royale to A.I.M.'s hidden base just before it explodes; Some elements of the plot cross over with Tales to Astonish 82-85 and Tales of Suspense 79-84. Fantastic Four ad. "If Kaluu Should Triumph...", script by Denny O'Neil and Bill Everett (co-plot), art by Bill Everett; After 500 years of exile in the Nameless Dimension Kaluu returns to destroy his former friend, The Ancient One; Sealing Strange's sanctum in an impenetrable barrier which not even Strange's ectoplasmic form can pass he summons the Demons Of Danak, other-dimensional monsters, to attack; Knowing they cannot be stopped while in contact with their master, Strange & his mentor wait until the creatures penetrate the barrier. Merry Marvel Marching Society info and coupon. 36 pgs., full color. Cover price $0.12.