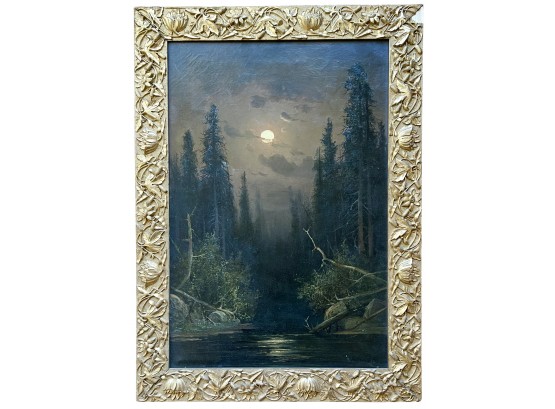 About the Artist from ffscat.csail.mit.edu: "Schafer's paintings typically have three distinct appeals. The primary one is a strong artistic merit, arising from a good sense of composition and color, and an overall feeling of having succeeded in capturing the impression and mood of the original scene. Second, many of his paintings represent a bygone era, depicting native inhabitants, wilderness, wildlife, and undeveloped locales that have long since disappeared. This second appeal goes beyond simple historical interest; it refers to a simpler time and to the lost frontier, but from the hand of an artist who got there in time to capture it. Finally, many of Schafer's paintings are of landmarks of high iconic value: the Golden Gate, Mount Shasta, Mount Hood, Yosemite Valley, Monterey Bay. These landmarks are immediately recognizable by a large audience today, and that recognition produces the third appeal. All Schafer paintings have at least one or two of these features, and many have all three.

Schafer's overall style is that of the nineteenth-century American realist landscape tradition, taking maximum advantage of the dramatic western American landscape and with a strong element of naturalism--a preference to capture the impression of an object such as a tree rather than to provide photographic detail of it.

Schafer's paintings depict actual appearances of nature, especially as to color, texture, clutter, and light. There is little evidence of idealization of scene content in the form of careful balance or cleaning up woodland clutter. On the other hand, many of his pictures appear to be composites, with a well-known landmark in the center but high framing crags or a small foreground waterfall borrowed from another site. As part of the same artistic license, Schafer exercises a choice of vantage point for each scene so that the apparently natural appearance includes interesting proportions of light and dark, of forest and mountain, and of division of the canvas into sections of distinct character. The paintings of the Pacific coast, with their horizontal format, damp, foggy atmosphere, and feeling of solitude, could find their way into an exhibition of Luminist work, while the eastern forest scenes of woodlands with bright autumn color are sufficiently similar to work of the Hudson River school that absent the western landscapes Schafer might be thought to be a late member of that school.

A common compositional device seen in most of Schafer's mountain landscapes is a foreground/middle range division, represented by a mountain ridge or a line of treetops, along a diagonal line from an upper corner to the lower center or the opposite lower corner. Another frequent compositional device is to place the nearest part of the foreground in shadow, leaving the eye to be first attracted to a bright, sunlit area in the middle of the painting, rather than nearby objects that perspective requires to be larger. At the same time, the dark foreground is usually roughly textured, creating, together with vertical trees or cliffs on one or both sides, a repoussoir (framing) effect. This repoussoir is usually asymmetric, and there is often a body of water in the middle distance. For example, [View of Mount Tamalpais], at the right, exhibits all of these compositional devices except for the body of water (for which the bright meadow stands in). Each of these devices is characteristic of European classical and "picturesque" landscapes and taken together they suggest that Schafer received some form of standard art training, or at least read the textbooks of the day.


Many of Schafer's canvases have a dramatic appearance, arising from the choice and intensity of color and light—the image to the right above again provides an example—but stopping well short of the awesome and melodramatic (sometimes called "sublime") effects found in canvases of Thomas Cole, Albert Bierstadt,
and Frederic Edwin Church. At the same time, except for the seacoast scenes already mentioned, Schafer's style is not particularly Luminist in character; his mountains, trees, and lakes are dramatically toned, rather than the atmosphere itself, his brushstrokes are usually visible, and other Luminist characteristics such as horizontal organization and a feeling of quiet are usually missing. But there are exceptions. The painting at the left is very much in the Luminist style.

Some biographical sketches suggest that Schafer's style developed in the Impressionist direction during the time he was painting in the western United States, but the evidence developed in preparing this inventory does not support that suggestion. Although it is risky to generalize from the small number of dated examples (fewer than one in ten canvases bear dates), even his earliest paintings show little use of line; they are executed with visible, broad, barely-controlled brushstrokes of color that emphasize form and shape, a technique associated with Impressionist style8 but not by itself sufficient to identify the work as Impressionist. Even the notion that his later paintings used less saturated, lighter colors is not apparent in the canvases with late dates, and none of Schafer's paintings make use of the bright, raw colors that might justify an Impressionist label."